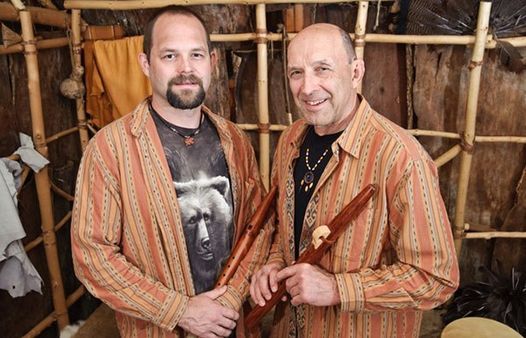 A Virtual Visit with Joseph and Jesse Bruchac

Join us for a virtual presentation with Joseph and Jesse Bruchac. For over forty years Joseph Bruchac has been creating literature and music that reflect his indigenous heritage and traditions, as a proud Nulhegan Abenaki citizen and respected elder among his people. His son Jesse follows in the tradition as a traditional storyteller, musician, and Abenaki language instructor.

Joseph Bruchac is the author of more than 120 books for children and adults. His best-selling Keepers of the Earth: Native American Stories and Environmental Activities for Children series, with its remarkable integration of science and folklore, continue to receive critical acclaim and to be used in classrooms throughout the country. Jesse has written and published several bilingual books, and recordings in the language. He has lectured at Yale, Harvard, Dartmouth, Princeton, and is currently co-teaching (alongside Conor McDonough Quinn) a Wabanaki Language course at the University of Southern Maine. Jesse has also acted as consultant, translator, composer, and language coach for programs on AMC, National Geographic, and PBS.

Email director@newburynhlibrary.net for a link to the video event. This event is free and open to the public.